Sons Of A Tradesman

Sons of a Tradesman are a high energy rock and roll band from West Palm Beach, FL. The band formed in 2017 with front man; Andrew Alonso, drummer; Chris Santiago, bassist; Nicholas Polycarpo, and guitarist; PJ Saiani.  The band started playing live cover shows and writing original music.  After about a year PJ left the band and was replaced by guitarist Mike Guido; formerly of the West Palm Beach band Raggy Monster. In the summer of 2019 the band started recording their debut album however, the untimely death of the bassist, Nicholas Polycarpo, halted the album production and left the band wondering if they were even going to continue. After some time of grieving they decided that, in honor of their brother, they would continue the legacy in his honor and finish what they started.

The album concept was developed by our late bassist, Nicholas Polycarpo. He was an English Lit major and had the idea of writing a novel based on our band. 4 brothers who are fighting over who gets to be “heir to the thrown”

The oldest is the Bandit (Andrew, Track #2) who is a gun slinging renegade who has no respect for the law. He ultimately doesn’t want to follow his father but, as the oldest son, is entitled to the thrown. Andrews world imagery is “Old West” as seen in the SINGLE COVER ART for Bandit.

The 3rd Son (Chris, The Wolf, Track #8) is a kind hearted but aggressive in nature. He is not interested in the family’s wealth but more concerned about his two older brothers quarrels.  He also has the ability to shape shift into an actual wolf. His world imagery is “earthy and natural”

The 4th Son (Mike, The Vigilante, Track #3) is a firm believer in fairness and justice and spends his life enforcing that as a sort of “vigilante super hero”. The Baron hires him to hunt down a criminal which, unbeknownst to him, is his brother, The bandit. The Vigilante’s world imagery is “Cyber Punk” as seen in the SINGLE COVER ART for The Vigilante.

Nick was planning on writing a whole novel but unfortunately passed away on Halloween of 2019. Our goal was to finish this album and carry the concept through in memory of him. 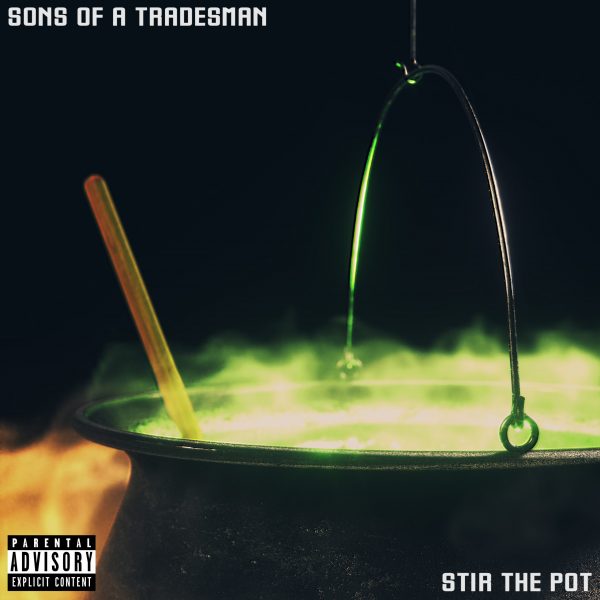 Sons Of A Tradesman

The debut album by Sons Of A Tradesman is a concept album developed by the late band bassist, Nicholas Polycarpo. The album was developed on the concept of writing a novel based on the band. Four brothers who are fighting to become the “heir to the thrown”.